It is with the deepest regret that we have to announce the death of one of our stalwart members, Mr Michael Vout, known to many as “MLV”, who passed away in the early hours of this morning, Friday 27th March 2015, at Bath’s Royal United Hospital, following a severe stroke which he suffered in mid-February this year.

Michael made an amazing contribution to preservation in general, and in particular to the restoration of 4123 and his own ‘Battle of Britain’ class locomotive no. 34058 ‘Sir Frederick Pile’.  He had led the restoration efforts on both these projects for many years since the mid-80s, and during this time he personally constructed many new components to the highest of standards, and all employing traditional engineering methods and practices.

Michael was a unique character and touched the lives of many people with his sense of humour, willingness to assist on noble causes, and his passionate desire to see his beloved ‘Heavy Engineering’ live on through the development of youngsters and the progression of the preservation scene in general.

Those of us who knew him well were deeply saddened by the seriousness of his condition in recent weeks which had cruelly robbed a highly intelligent and articulate man of the majority of his physical abilities and capacity to communicate.  However, it is safe to say that he will live on in both the work he did on the locomotives, and in our minds which are full of his amusing stories & anecdotes, a lamentably small fraction of his engineering knowledge, and his unique outlook on life. 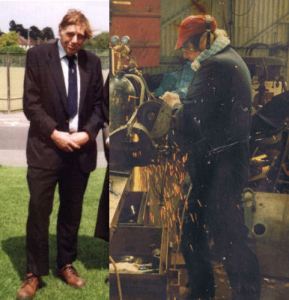 Hopefully the photos and the captions do the talking.   If you’d like to see more photos of how this is coming along, have a look at our Flikr page. 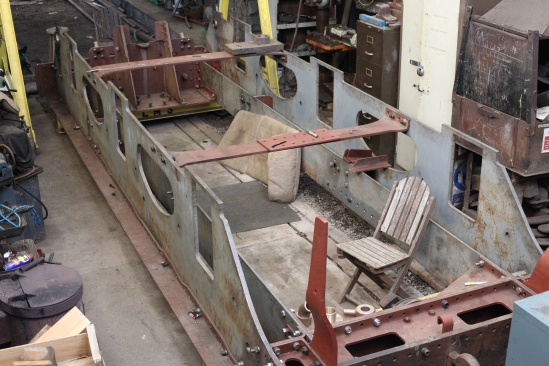 General view of the new tender chassis which has been constructed, and is now substantially complete and waiting to be rivetted. 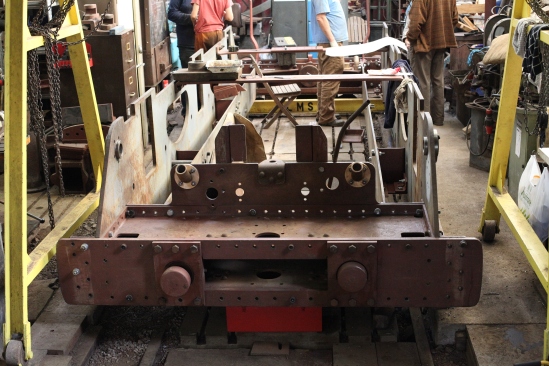 Another view of the new chassis at the front looking towards the rear. 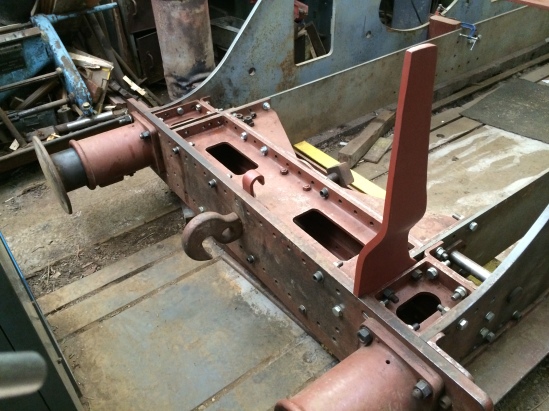 The rear of the new chassis showing the dragbox, coupling hook, buffers and guard irons. 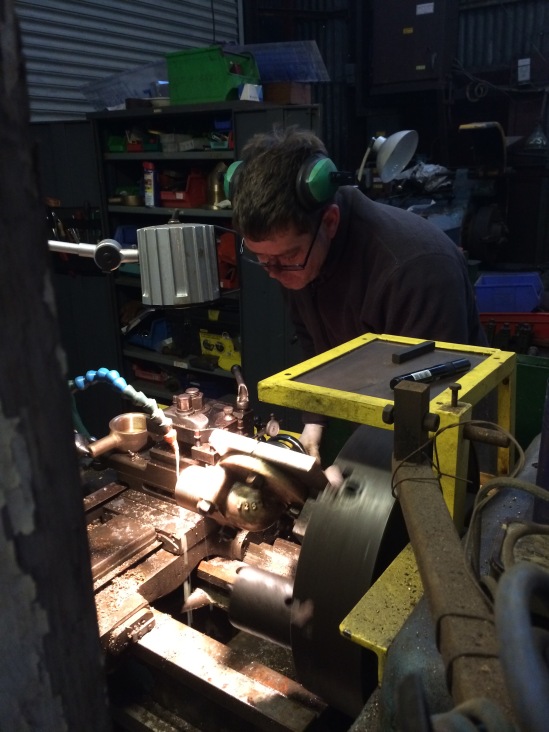 One of the new castings for the tender water feed elbows is machined on the lathe. Here it is having the 11 TPI screw thread cut. 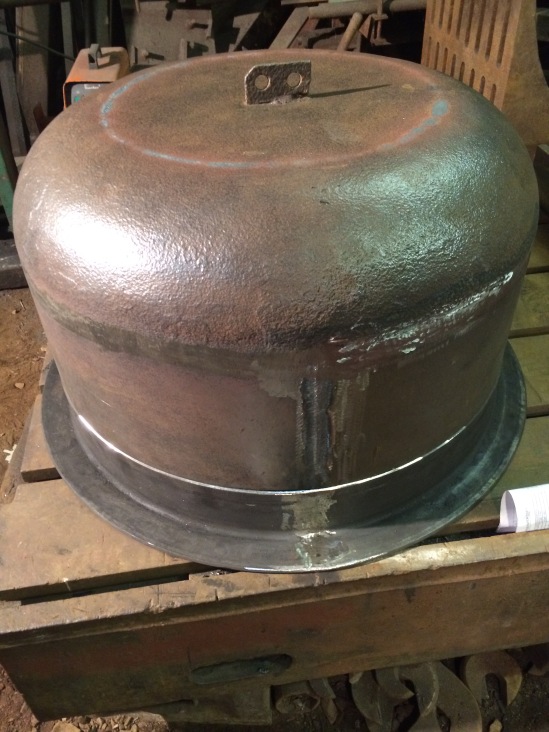 This is the ‘dome’ for the water scoop filler pipe, which sits at the back of the tender, and is a distinctive feature of those tenders that were fitted with water scoops (i.e. all the 4Fs). This is a combination of new metal (the lower barrel and angle) with a re-used original top section which was repairable, and which would have been very difficult/expensive to replace with a new item. 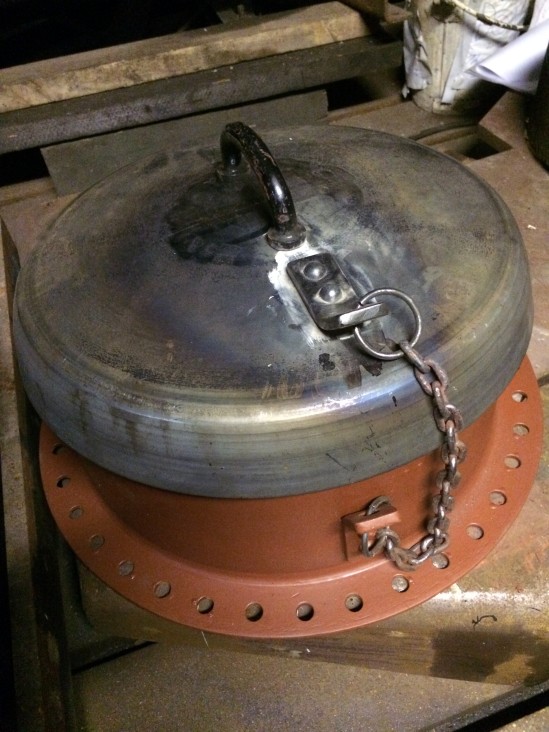 Here is the new tender tank water filler pipe and lid. Later LMS tenders had a hinged lid, but 4123 always had a ‘loose’ lid which was attached to the pipe with a chain (to stop it getting lost), so this is what we’ve replicated. We didn’t have an original to copy, so the profile for this had to be scaled from a drawing to get the correct radius and height, etc. This was ‘metal- spun’ for us by Purdies of Bradford. 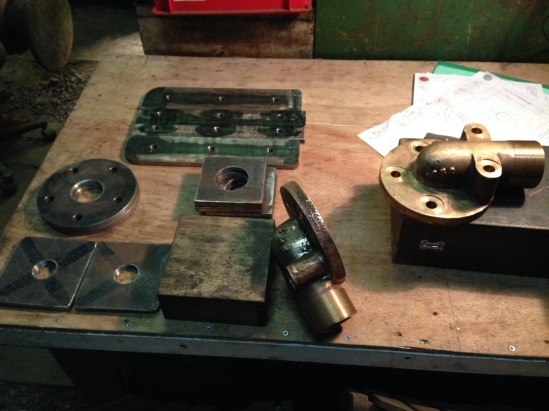 This pile of bits are components of the tender tank which are fitted inside and outside of the ‘well’ on the bottom of the tank. These have now been welded into position into the well. The two new gunmetal castings for the water feed elbows can also been seen – having been fully machined – and these are now ready to fit to the tank when the time comes. 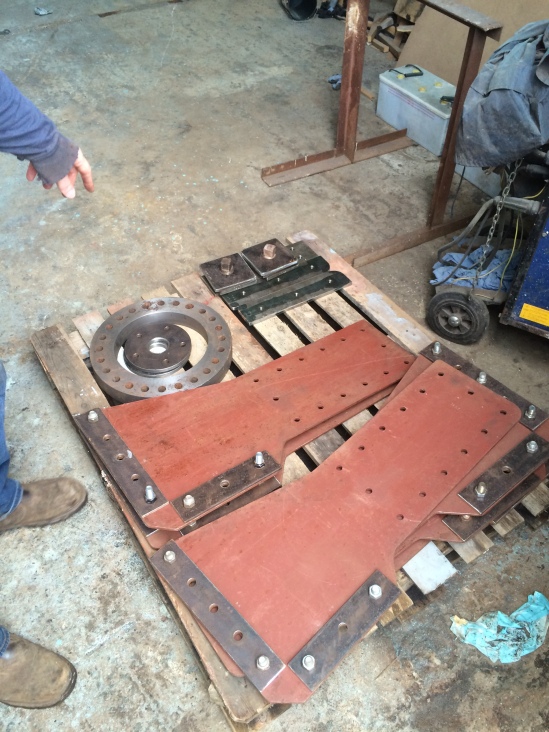 Here are some more tender tank internal components waiting to be installed. The red plates are vertical stiffeners which form part of the main structure of the tank, and to which the main internal cross-baffles are attached. 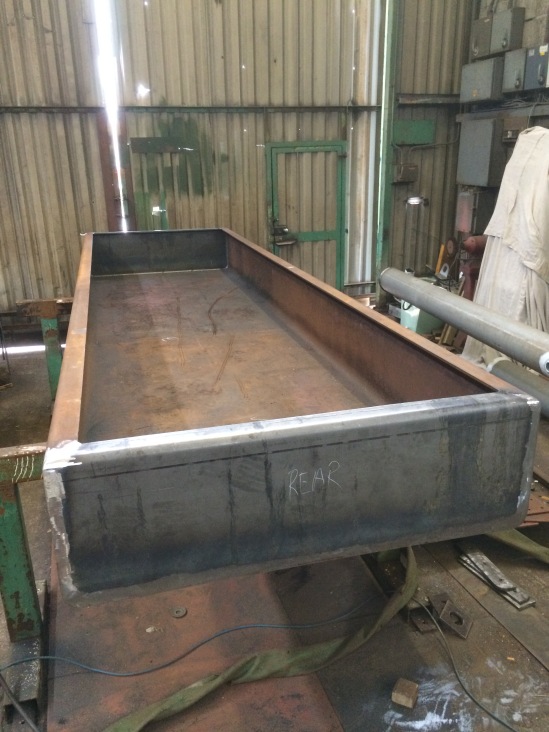 Here is a view on the newly fabricated tender tank ‘well’. This fits underneath the main body of the tank, between the inner frames of the chassis, and provides a useful additional ~500 gallons of water capacity. We have made this from one piece of plate folded to the correct shape, and with end plates welded in. Doing it this way has removed around 300 rivets from the tank. 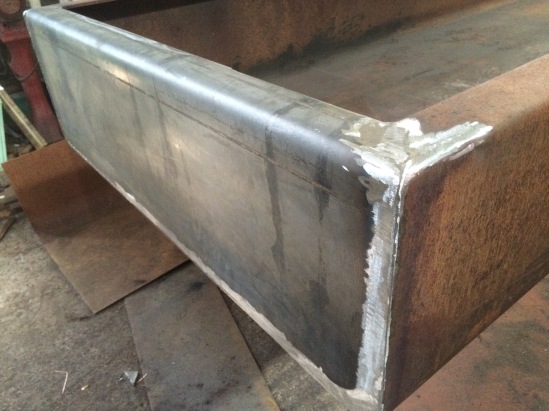 A close-up of the end plate of the well after welding was completed and ground flush. Originally this would have been a riveted plate, but welding is easier and more cost effective, and will never be seen once the tank is installed on the frames. 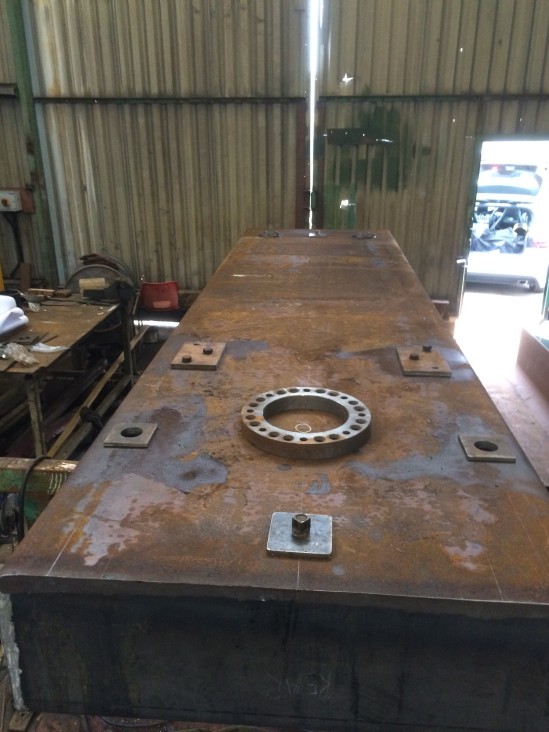 Here’s a view on the underside of the tender well showing the various attachments which have now been welded on. Don’t let the rusty finish worry you – this will be grit blasted once the tank fabrication is completed, and then coated with a decent paint system, so it will hopefully last for many years.

The following is from the text of a brief update article which ran in the Avon Valley Railway’s in-house news magazine, ‘Ground Signal’ in Feb 2015.

Since the last report, the work on LMS 4123 (BR 44123) and tender No 3257 has continued apace. However before giving an update on this, we would first like to welcome two new members of the mid-week group.  They are Alan Church and Peter Crossfield, both of whom are bringing a wealth of knowledge to the team.  We also have two new volunteers to the weekend team – Nick Ealey and Justin Edwards who are both getting stuck in to helping with the making of new parts for the tender.

Work is progressing on the tender chassis and tank, this being primarily a weekend gang project, and numerous additional items have been manufactured,  such as:

We are also producing wooden patterns for the numerous small castings and fittings which will allow the tender to eventually be made operational.  Many of our castings are made at Bristol Foundry just down the road in Brislington, this being an arrangement that works well for us as it gives us the opportunity to discuss the castings with the foundry manager, and there are no delivery charges!

To allow things to progress more quickly, we have recently been working with another Bristol company with a view to having them help us with the fabrication and assembly of the new tender tank.  This is almost at the point where they are ready to start work on the water well at the bottom of the tank which forms the foundation on which the rest of the tank is assembled.   As you can imagine, this work will be expensive, very quickly running into thousands of pounds, so if anyone has some spare cash they would like to donate, this would be gratefully received, and would make an amazing difference to our speed of progress.

The loco has been having attention as well, primarily by the mid-week gang. The nuts on the Piston covers have been loosened and many more loco parts have been rubbed down and painted.  The rear buffer beam was removed after a lot of hard work then rubbed down and painted.  The loco requires a brand new rear dragbox, and the large and heavy steel plates for this are approximately 50% manufactured.

One item that has yet to submit to our attempts to remove it is the smoke box door hinge pin. It is about 2’6” long and after soaking it in diesel, applying lots of heat, using a hydraulic jack, an Acrow prop and lots of persuasion with a sledge hammer it is yet to move a gnat’s whatsit. Hopefully by the time you read this we hope to have got the better of the !?!?!?!?!. We need to take the door off to check its condition and measure it up prior to having a new one made.

If any member is on site Mondays or Fridays do come and see us at the top of the yard by the loco and we will give you a guided tour and a pair of overalls!